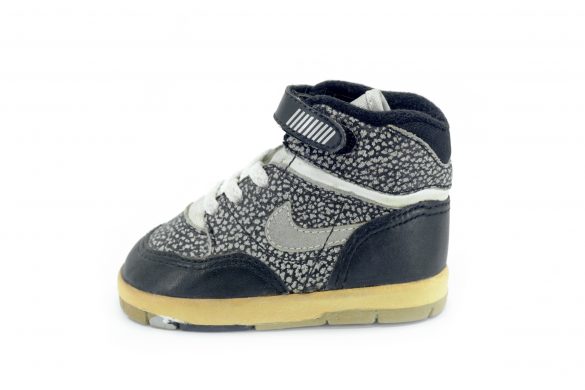 1987-1988 was an outstanding year for Michael Jordan performance wise. He won the Slam Dunk contest, All Star MVP, All-Defensive First Team and Defensive Player of the Year. Through all this success, he was wearing the Air Jordan 3.
Nike needed a new designer to make the Air Jordan III. So they went to world famous Tinker Hatfield. His name is known mainly for designing Air Jordan III-XV, and also making a return on the AJ XXs, but Tinker also designed some really nice Nike’s as well. Tinker and Michael worked hard, talked to each other on what were good ideas. On the AJ III model Tinker placed the famous jumpman logo on the back of the shoe, and adding in a “elephant print” on the toe box.
Unlike the AJ1 and AJ2, the AJ3 had really few if not any kids & baby releases in 1987 ( except a white version ). Therefore Nike decided to play with the ‘elephant/cement’ print and put it on kids basketball shoes.