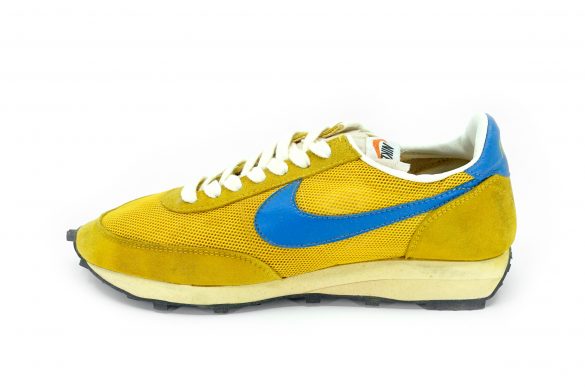 During 1977-1978, Nike’s total sales jumped greatly from $28M to $71M. This was due to the fact that Nike started its venture into the world market and expended its marketing routes.It was natural that the company had to reconsider its brand identity in the process of globaliza- tion. They revised the script logo, which was often mistaken for ‘Mike’, decided to unify them to a clear block type logo and changed the company name from BRS to Nike Inc.

The functions of LD-1000V were highly evaluated but it was hard to differenciate with its old model LD-1000. So the company decided to completely renew the naming and coloring and stress the fact that it was a new shoe. In order to sell various shoes in different locations, the product lineup had to be comprehensible to some extent. If the LD series were already behind the scenes, it would have been fine, but at that time the LD-1000 was still an ongoing model.

As a result LDV ( Long Distance Vector ) became the best-seller model to represent this era in the company’s history. To meet the expending supply by holding back cost, products were made not only in the US but in Taiwan and Korea too. To sell in parts of the world where local currencies were still weaker to the US Dollar, production in Asia was key. It was also curtain time for Nike’s mass production in Asia.