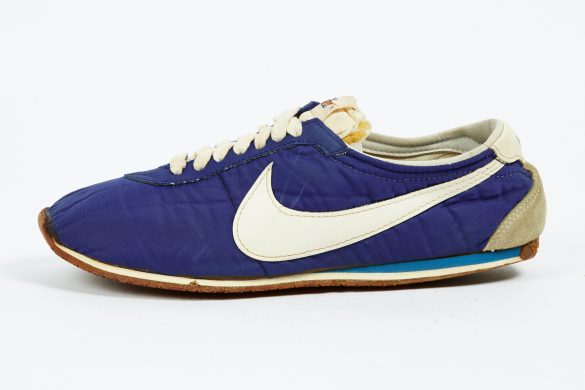 In the original box – Cursive tag

Marathon is reputed to be one of the most challenging of track and field.
It is not only held in the summer Olympics, but there are various international meets held around the world and athletes place the same weight on those competitions as well. Fukuoka International Marathon Championship, annualy held in the Japanese city of Hakata is one such event. In the center of this championship’s running course is a symbolic park with a lake. The marathon shoes Obori, borrows its name from Obori (officially pronounced Ohori) Park situated within the running course. (In Japanese, Ohori means “big moat.”) Because the shoes were originally launched from Onitsuka Tiger Shoe , a championship held in Japan became the origin for its name. However, when Jon Anderson wore the Nike Obori and won the boston Marathon, Nike decided to change the shoe name into Boston. Onitsuka Tiger greatly benefited from the incident. Since Nike changed the shoe name, Onitsuka could market the same shoes by maintaining the already established name of Obori. In the initial stage of the launch, Obori had two colors for the nylon version and the suede version. However, since its name change to Boston, variation has been limited to the navy nylon version. If Anderson had won the New York City Marathon, the name could have become New York. Whatever the background and trivia, these shoes were named Boston by the goddess of victory who smiled upon Anderson.