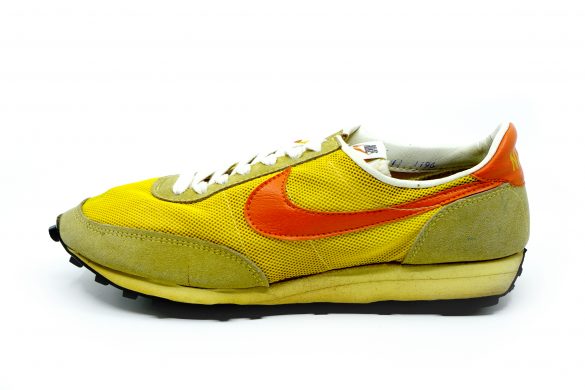 The success or failure of the last greatly affects the outcome of the shoe. The best last is not always the ones that faithfully reproduce the form of the foot. Particularly in the case of training shoes, a straight line-like last is better. It gives stability when actually worn. Nike proactively sought to use straight lasts from its first generation Cortez, but in developing the successor to LD-1000, it went on to seek a straighter last, that it was almost difficult to differentiate between the left and the right foot. Nike named it the Vector last and added the initial “V” to the shoe name.

LD-1000’s exaggerated flare sole was toned down in this model and the wearer no longer had to worry about hurting the calf. Material for the midsole was changed from rigid sponge to EVA and it became a great light training shoe that excelled in cushioning and stability.