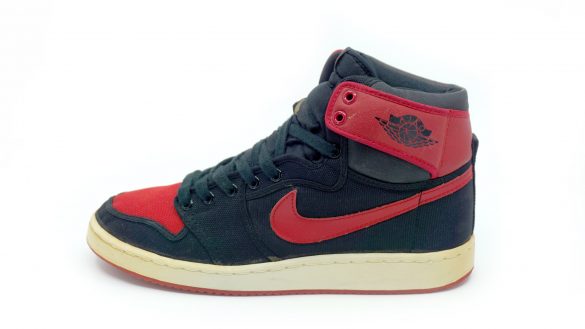 The Air Jordan I leather received its canvas counterpart as early as 1985, though most of the production really hit in 1986. The canvas version was part of the ‘recreational’ lines that Nike put in place on all of their basketball lines. The Terminator had their own canvas versions, and the Vandal were the alter-ego of the Dunk, so to speak. Named the Air Jordan KO, they feature ‘AJKO’ on the wings logos instead of ‘Air Jordan’. The working title for the shoe name was ‘Air Jordan Knock-Off’ ( because that’s what the shoe was, a knock-off, a takedown model ). It was supposed to stay purely internal at Nike but somehow hit the shelves that way. At least 4 colorways were originally released, though about 10, including samples, were produced. The AJKO actually uses the Nike Vandal midsole/outsole.