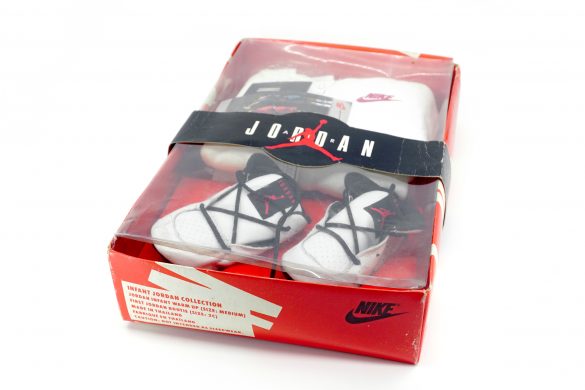 in the original box

On the Air Jordan 6 Michael Jordan gave direct orders to have a clean toe, so Tinker Hatfield made sure the Air Jordan VI had a reinforcement around the toe, making the AJ VI the first basketball model to obtain this. MJ had problems putting on the past five models, so Tinker designed two holes on the top of the tongue, and one loop on the back, calling it “a spoiler”. The Air Jordan 6 was the second model to have the clear rubber sole. When the Air Jordan V was released a lot of people complained that their children were falling because the soles would collect dust that was on the court, making the sole slippery. Now on the Air Jordan VI Tinker added a more solid rubber, so this problem would not happen again.

Nike made the AJ6 immediately available for babies and toddlers, releasing complete gear sets such as this one.