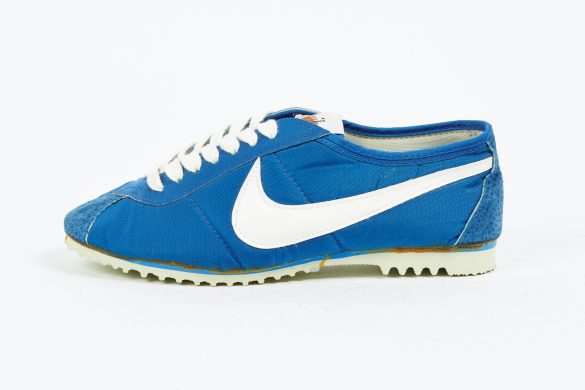 In the original box – Cursive tag

Onitsuka Tiger sold outstanding marathon shoes name Marup, light-weight with excellent cushioning and great fit.
Ever since it was released in 1954 it was improved many times and has grown into Onitsuka’s flagship model. And Marup of course was BRS’s main product. In 1966’s Boston Marathon, more than sixty per cent of runners wore Marup. Bill Bowerman tried to further improve Marup. He therefore showed Onitsuka his hand-made light-weight in nylon upper shoes worn by students and proposed whether they can produce a similar model. Up until then, Marup was only made from leather or canvas upper but Onitsuka introduced a soft three layered nylon material and succeeded in making Marup with a nylon upper. At this moment, the world’s first nylon sneaker was born. After Nike was established, the Marup Nylon model was marketed as Marathon. It became a long seller model, sold untill around 1977. Cross Country, a classic model using a canvas upper was sold at a lower price than Marathon but it was on the market for a short time due to lack of popularity. They are quite rare to be seen today.